True Ignorance is not the absence of knowledge, but the refusal to acquire it.
Karl Popper
(quote from Matthew Syed “Black Box Thinking“)

Regular readers of the Bus Stops Here blog will know that, in addition to campaigning for TfL to end its complacency about Monitoring and Reporting of the Operational Safety of its Buses, I’ve been lobbying our national transport officials to extend the small victories we’ve won in London to the Government’s much-touted (by the well-connected and powerful UK Bus Industry anyway) Bus Services Bill.

As a result of relentless campaigning and skillful intervention by members the London Assembly—in contrast to any other region in the United Kingdom—Transport for London:

These two Operational Safety Monitoring and Reporting practices provide both the public and Bus Operations staff much more transparency and access to data and independent reporting systems which—as has been shown in other transport modes like rail, maritime and air—help underpin a resilient self-reinforcing safety culture.   While I’m the first to point out the manifest deficiencies of TfL’s complacency about the safety of its contracted Bus Operations (remember, TfL was forced to come to the table and agree on both these actions after years of campaigning by crash survivors, bus drivers, London Assembly members and transport professionals), these policies give Londoners much better ability to scrutinise their Bus Operators’ operational safety performance than anywhere else in the country.

Based on last year’s published data, we know that 14 people were killed in safety incidents involving TfL’s Contracted Bus fleet.

And, if we’re minded (OK, we are), we can use information from TfL’s League Table of Death to investigate even further.To wit:

TfL Bus Subcontractor Metroline (31 Dec 15 Operating Profit £37,586,000, an increase of 8.2% from a 2014 Operating Profit of £34,725,000) and Metroline West (31 Dec 15 Operating Profit £9,775,000, a decrease of less-than-1% from a 2014 Operating Profit of £9,842,000) were—combined—involved in 6 fatal incidents, 5 involving pedestrians and 1 involving the operator/occupant of a motor vehicle, making Metroline the leader of TfL’s League Table of Death.  A little more research will show that Metroline is a wholly-owned subsidiary of the Singapore-listed global transport company ComfortDelGro Group, whose FY2015 profits totalled $(Singapore)363.8 million (about UK£214 million).  Poking further around the net (as you do), you’ll find that despite Metroline leading in TfL Bus Fatals in 2015, TfL and our, erm, ‘watchdog’ LondonTravelWatch named Metroline “Bus Operator of the Year” for 2015. 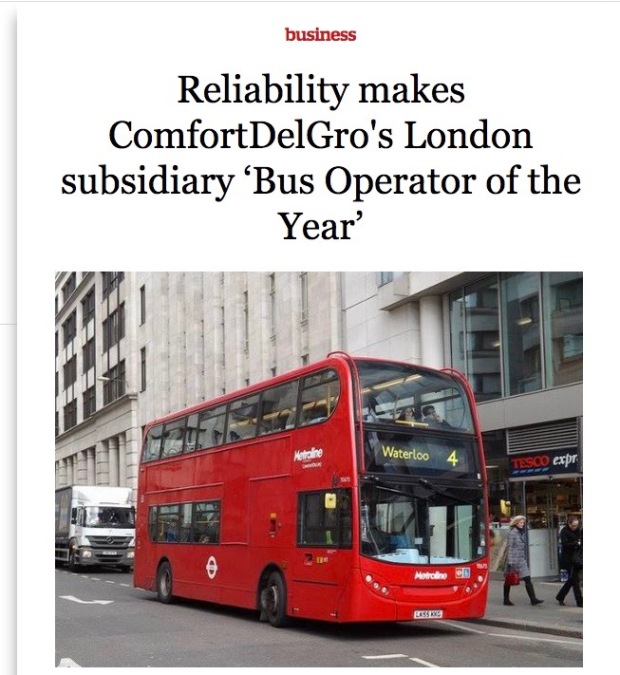 Like TfL and LondonTravelWatch, just Ingore the 6 People Killed from Metroline Bus Collisions

Tied for Second Place on TfL’s League Table of Death are:
TfL Bus Subcontractor Arriva (for this table, consisting of (a) Arriva London North – YE 31 Dec 15 Operating Profit £26,981,000 an increase of 18% on 2014’s Operating Profit, £22,789,000; (b) Arriva London South – YE 31 Dec 15 Operating Loss of £3,955,000 a 31% increase on 2014’s Operating Loss of £3,018,000; and (c) Arriva The Shires YE 31 Dec 15 Operating Profit £2,200,000 a 59% decrease on 2014’s Operating Profit of £5,405,000) is owned by Arriva PLC which is in turn owned by Deutsche Bahn, the state-owned German National Railway, whose 2015 turnover totalled €40,468 Billion.
TfL Bus Subcontractor RATP/London United (London United Operating Profit YE 11 Dec 15 £5,103,000 a fractionally smaller amount than its 2014 Operating Profit of £5,116,000) owned by Régie Autonome des Transports Parisiens the state-owned Paris Region Public Transport Operator, the 5th largest public transport operator in the world with an annual turnover over €5.556 Billion in 2015.
And last (but not least) on TfL’s League Table of Death:
TfL Bus Subcontractor Stagecoach (for this table, consisting of East London Bus & Coach Company, YE 30 Apr 15 Operating Profit £6,437,000 a 260% increase on 2014’s Operating Profits £1,781,000), a UK public company with YE 2016 Turnover of £3.87 Billion and an Operating profit of £228.8 million.
TfL Bus Subcontractor Go Ahead, whose YE 2016 Operating Profit from its London Bus Operations totalled £47.1 million (a 6.3% increase on 2014) and whose revenues across its UK bus and rail businesses total £3,361.3 billion in YE 2016, its UK Bus Business having racked up £100.4 million in Operating Profit last FY.  Readers may recall that Go Ahead—with the full support of Transport for London— fired TfL Bus Drivers who testified against its operational safety practice in court…and lost.  Go Ahead also owns the rail franchise that manages Southern Rail, which has received a lot of unfavourable press. The company’s current Chief Executive David Brown was the immediate predecessor to TfL’s MD for Surface Transport.
Because we have the names of the companies involved in these 2015 TfL Bus Fatalities, we now know that the Private For-Profit Bus Companies are major international corporations, all of whom are extracting profits from the public bus services contracted by TfL.  14 people in London were killed in TfL Bus Safety Incidents involving 5 international transport companies which, collectively, enjoyed an Operating Profit of £125,178,100 running public bus services which our tax payments subsidised and personal our post-tax income purchased too.
When these TfL London Bus Subcontractors’ safety records are evaluated on a “KSI Collision per Bus in Operator’s Fleet” basis, their relative operational safety performance is put into starker relief:

In addition to being involved with 30% of the 2015 Bus Fatals, two Bus Operators—Stagecoach and Arriva— account for 32% of TfL’s Contracted Fleet and 53% of all KSI Bus Collisions. These two companies also had £66,536,800 in combined profits too.

We know all this because we succeeded in making TfL publish the names of the Bus Companies involved in safety incidents.

While I often rail against TfL for being so disingenuous about the quality and timing of its Bus Safety Data, the fact that we have this information opens all kinds of doors to further scrutiny.  Since we know that Metroline had the highest number of fatalities, we can use this knowledge to delve further into its accounts (all of which are available on Companies’ House), actions by its parent company and other issues of interest that might pop up in such research  For example, I was surprised to discover that one of Metroline Rail’s  Director’s owns a Bus together with TfL’s MD for Surface Transport, Leon Daniels. While I suppose there’s no prohibition on TfL Directors co-owning vintage buses with executives employed by transport companies directly related to ones they contract, manage and regulate, the fact that TfL publishes it Bus Casualty Collision Data every quarter means the public can closely scrutinise the private companies providing public bus services and their relationships to the very public officials who contract and manage them…in London.

How about the rest of the country?

When I recently received this tweet from @SaveOurBuses_UK about the DfT’s 2015 Bus UK Bus Collision Casualty Data, I immediately thought: What a gold mine! 5381 recorded collisions? 64 deaths? 702 casualties? With 15 recorded collisions and 2 serious injuries per day in 2015, I wonder how many incidents involved (e.g.) Stagecoach, Arriva, RATP, Metroline or Go Ahead Buses?

I immediately fired off an FOI to the DfT to see if I could find a national trend to compare with the Bus Operator Safety Performance data TfL had already posted on its website.:

Dear Department for Transport,
In your publication “Reported Road Casualties Great Britain: 2015 Annual Report” Table RAS20001 “Vehicles involved in reported accidents and involvement rates by vehicle type and severity of accident, Great Britain, 2005 – 2015” shows that 64 people were killed and 702 people were Seriously Injured in incidents involving Buses or Coaches in 2015. Kindly provide me with the dates of the incidents, the incident location (or reporting locality) and the name of the Bus or Coach Operator involved in these 2015 fatal and serious injury incidents.
Yours faithfully,
Tom Kearney

The response I received from the DfT shocked even someone as cynical I am about the complete indifference of our public servants to the carnage wreaked by the systems they are paid to oversee:

You got that right? We only know the names of Bus Operators for 14 of the 64 fatal collisions in 2015.  And we only know that 22% because someone who nearly died from a bus collision campaigned for years to make this location-specific safety incident data public for Londoners.

But we don’t know the names of the Bus Operators involved in the killing of 50 human beings in the rest of the United Kingdom.

The Bus Services Bill provides an ideal opportunity for us to consolidate and extend what we’ve achieved in forcing London’s transport authority to collect and publish meaningful operational safety performance data for public scrutiny.

Let’s end the age of Big [Missing] Data and have the Bus Services Bill ensure that all UK Bus Operators and the local authorities in which they operate (for private profit) be made responsible for collecting and publishing critical operational safety data for public scrutiny.

Based on what we know about the 5 international transport companies whose buses were involved in killing 14 people in London last year, we know they can afford it.